You are here: Home / Archives for Canary Islands 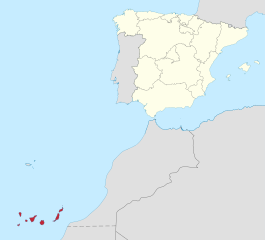 The Canary Islands, also known informally as the Canaries, are a Spanish archipelago and the southernmost autonomous community of Spain located in the Atlantic Ocean. In 2019, the Canary Islands had a population of 2,153,389 residents, mostly concentrated on the island of Tenerife and the island of Gran Canaria. It is a major tourist destination with over 12 million visitors per year.

Country description courtesy of Wikipedia. Used by permission. Map image courtesy of TUBS. Used by permission.
According to the Evangelical Focus website, the United Nations Refugee Agency representative in Spain, Sophie Muller, recently visted the Canary Islands and congratulated Modern Christian Mission, an evangelical church on the island of Fuerteventura, for their work with migrants. According to Angel Manuel Hernandez, pastor of the church, Muller told the church’s work team and volunteers that she was surprised by “the incredible and admirable work” they are doing.

This is a good example of how works of mercy can prepare hearts for the message of the gospel.