You are here: Home / Archives for Bangladesh 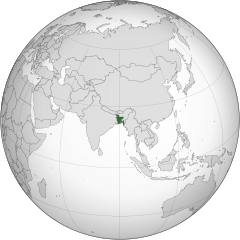 Bangladesh, officially the People's Republic of Bangladesh, is a country in South Asia. While it is the 92nd-largest country, spanning 147,570 square kilometres (56,980 sq mi), it is the world's 8th-most populous country with a population nearing 163 million, making it one of the most densely populated countries in the world.

Additional items for prayer can be found in this Prayercast for Bangladesh.