This website or its third-party tools use cookies which are necessary to its functioning and required to improve your experience. By clicking the consent button, you agree to allow the site to use, collect and/or store cookies.
Please click the consent button to view this website.
I accept
Deny cookies Go Back
You are here: Home / Archives for Iraq 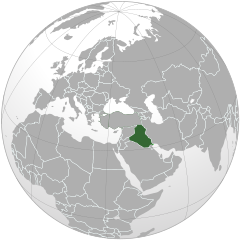 Iraq, officially the Republic of Iraq, is a country in Western Asia. The capital, and largest city, is Baghdad. Iraq is home to diverse ethnic groups including Arabs, Kurds, Chaldeans, Assyrians, Turkmen, Shabakis, Yazidis, Armenians, Mandeans, Circassians and Kawliya. Around 95% of the country's 37 million citizens are Muslims, with Christianity, Yarsan, Yezidism and Mandeanism also present. The official languages of Iraq are Arabic and Kurdish.

Additional items for prayer can be found in this Prayercast for Iraq.

WHERE DO WE GO FROM HERE?