You are here: Home / Archives for Tanzania 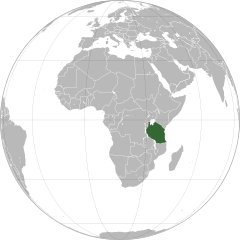 Tanzania is a country in East Africa within the African Great Lakes region. Mount Kilimanjaro, Africa's highest mountain, is in northeastern Tanzania. The United Nations estimated Tanzania's 2018 population at 56.31 million, which is slightly smaller than South Africa, making it the second most populous country located entirely south of the Equator. The population is composed of about 120 ethnic, linguistic, and religious groups. Over 100 different languages are spoken in Tanzania, making it the most linguistically diverse country in East Africa.

Additional items for prayer can be found in this Prayercast for Tanzania.

Country description courtesy of Wikipedia. Used by permission. Globe image courtesy of Marcos Elias de Oliveira Júnior. Public domain.
Of the three parallel passages which tell the story of Jesus receiving children to Himself (when His disciples tried to hinder them), the most descriptive is Mark 10:13-16: