You are here: Home / Archives for Democratic Republic of the Congo

Democratic Republic of the Congo 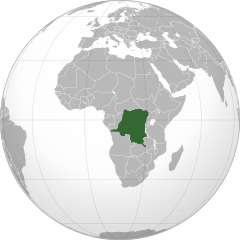 The Democratic Republic of the Congo, also known as DR Congo, the DRC, DROC, Congo-Kinshasa, or simply the Congo, is a country located in Central Africa. It is sometimes anachronistically referred to by its former name of Zaire, which was its official name between 1971 and 1997. It is, by area, the largest country in sub-Saharan Africa, the second-largest in all of Africa (after Algeria), and the 11th-largest in the world. With a population of over 78 million, the Democratic Republic of the Congo is the most populous officially Francophone country, the fourth-most-populous country in Africa, and the 16th-most-populous country in the world.

Additional items for prayer can be found in this Prayercast for the Democratic Republic of the Congo.