You are here: Home / Archives for Ecuador 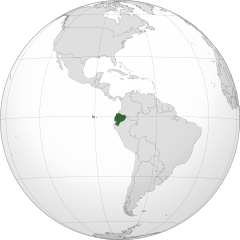 Ecuador, officially the Republic of Ecuador, is a country in northwestern South America. Ecuador also includes the Galápagos Islands in the Pacific, about 1,000 kilometres (620 mi) west of the mainland. Ecuador has an ethnically diverse population, with most of its 17.1 million people being mestizos, followed by large minorities of European, Amerindian, and African descendants. Spanish is the official language and is spoken by a majority of the population, though 13 Amerindian languages are also recognized, including Quichua and Shuar.

Additional items for prayer can be found in this Prayercast for Ecuador.

Country description courtesy of Wikipedia. Used by permission. Globe image courtesy of Addicted04. Used by permission.
The evangelical church in the nation of Ecuador has experienced dramatic growth over the past 60 years. According to the book Operation World, Ecuador had the lowest percentage of evangelical believers in Latin America in 1960 — 17,000 believers. By 2010, that number had skyrocketed to 1.2 million Jesus followers! Today, between 8% and 11% of Ecuadorians are evangelicals (Operation World, Prayercast, and Joshua Project).

And yet, there is a crisis brewing in Ecuador. The country has experienced serious political upheaval, and this turmoil has complicated the church’s capacity to train the next generation of ministers.