This website or its third-party tools use cookies which are necessary to its functioning and required to improve your experience. By clicking the consent button, you agree to allow the site to use, collect and/or store cookies.
Please click the consent button to view this website.
I accept
Deny cookies Go Back
You are here: Home / Archives for Papua New Guinea 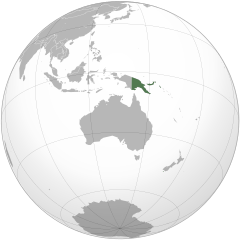 Papua New Guinea, officially the Independent State of Papua New Guinea, is a country in Oceania that occupies the eastern half of the island of New Guinea and its offshore islands in Melanesia, a region of the southwestern Pacific Ocean north of Australia. The western half of New Guinea forms the Indonesian provinces of Papua and West Papua. It is the world's 3rd largest island country with 462,840 km2 (178,700 sq mi). Papua New Guinea is one of the most culturally diverse countries in the world. It is also one of the most rural, as only 18 per cent of its people live in urban centres. There are 851 known languages in the country, of which 11 now have no known speakers. Most of the population of more than 8 million people lives in customary communities, which are as diverse as the languages. The country is one of the world's least explored, culturally and geographically. It is known to have numerous groups of uncontacted peoples.

Additional items for prayer can be found in this Prayercast for Papua New Guinea.

The animist shaken to the core by God’s truth is the story of Anton Egamankon, an animist who gave his life to Christ approximately thirteen years ago.